You can find below the major changes and improvements of Stambia DI Designer 2020 (S20.4.x) version.

This version includes an updated Runtime which contains a fixed issue.

The release notes of the Runtime can be found here.

Note that the Designer itself has not changed, it only contains an updated Runtime.

Some improvements and fixed issues. Have a look at the Changelog for further information.

You can find in this section the list of Components which have been updated in Designer 20.4.1

A new Stambia Query Editor has been implemented from this version to replace the SQL explorer.

This new Query Editor allows us to preform the SQL queries.

This is what the Stambia Query Editor looks like: 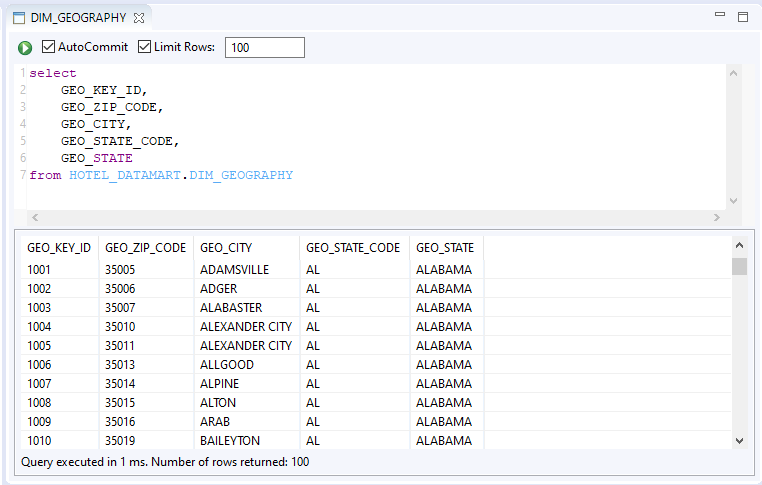 Note that this is the first designer version which include its own Stambia Query Editor. The most used features have been implemented in this version and they work well, and we still work on it for more improvements.

You can find in this section the list of Components which have been updated in designer 20.4.0.

EMF Compare Tool has been added to allows to compare more easily such XML models.

EMF Compare can be used to make the usage of versioning easier with Stambia: to resolve easier merge conflict when using this versioning.

Further information about EMF compare tool can be found at this article.

Since Stambia DI 20.1.0, there is a capability : Ability to define transparent staging area on a target datastore.

Now, we add the list of preferred staging areas, in the properties of the target metadata.

In the Window / Preferences menu, the preferred staging areas are defined. (Stambia/Mapping/Staging Area).

Then, on the target metadata, the preferred staging areas are displayed, in the properties:

Computed fields in the mapper

On the mappings, the computed fields are now displayed in the mapper :

Module Wizard guides you to manage, create, and use Modules.

When possible, we provided all the necessary libraries for a given Module to communicate with a given technology.

When this is the case, the libraries are shipped within the Modules itself or through the selection of a third party pack.

Import internal resources in the workspace

In the "Internal Resources" view, it is possible to import an element, a template for example, in the wokspace, with right click. 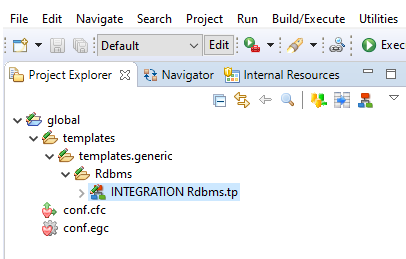 Until now, it was not possible to import an element that was already imported. The menu was no longer displayed even though you wanted a different location.

Whith this version we can import an already imported element. The menu is always displayed. If you select the same location, an overwrite confirmation message is displayed.

Exporting a project now generates a configuration file, included in the zip: export.configuration. 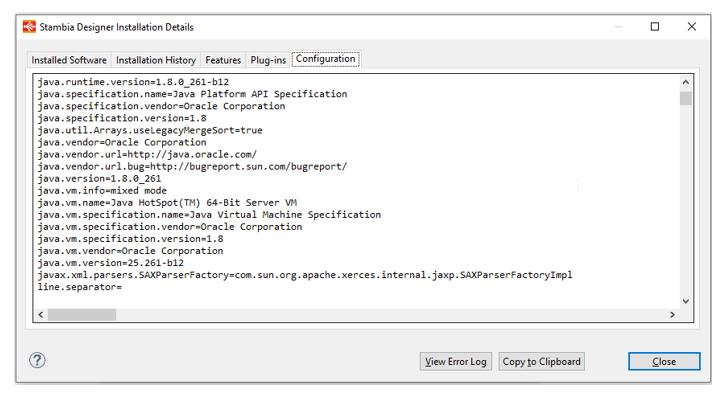 To practical usage and especially to guide user with the different reverse methods (from XSD or from XML data file), XML wizard has been improved in order to propose reversing in XSD mode or XML mode. Reversing from an Xsd file mode is defined as default selected mode. 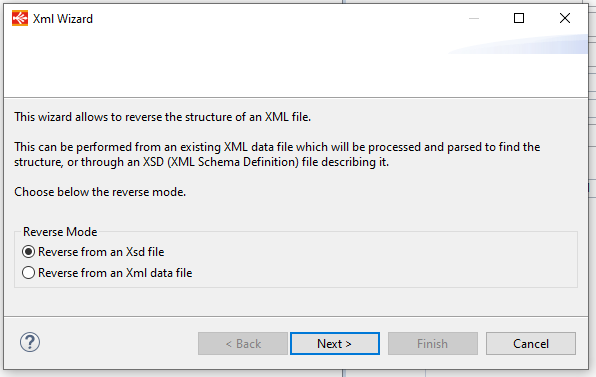 Reverse from an Xsd file mode

When keeping this default selected mode and continue by clicking to the "Next" button, user will be redirected to a screen where we select the XSD data file and the recursivity depth, initialized at 1 by default but user can change it. 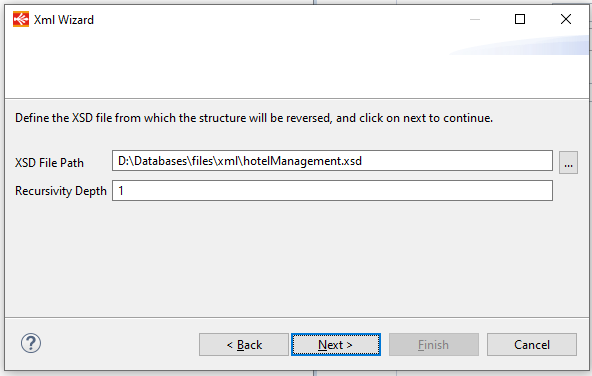 After selecting the Xsd data file, the screen to select the root element based on this selected Xsd file is proposed. 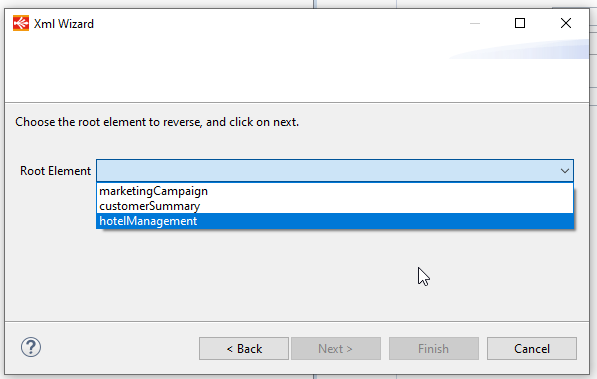 Finally, user will be redirected to the usual screen where is proposed the nodes to reverse according to the selected root, and he can finish the reverse. 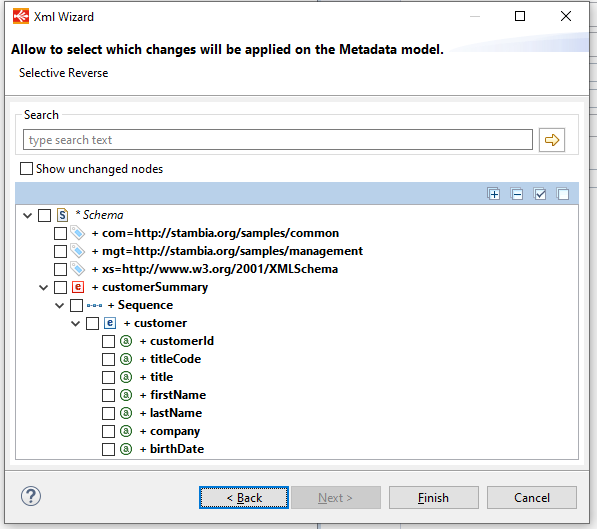 When the mode Reverse from an xml is selected instead of the Xsd mode, then the user will be redirected to screen where we select the Xml data file.

Selective reverse will be proposed to choose the nodes to reverse according to the selected .

After that, user will be redirected to the usual screen where is proposed the nodes to reverse according to the selected Xml file and user can finish the reverse .

"Generate XSD" option has been separated in a dedicated wizard. This new wizard named “XSD Generation Tool” is available on the root node of an XML Metadata.

When starting the wizard, the fields to choose the Xml Data file from which we want to generate the XSD File are proposed, and then user can start the generation by clicking to the "Generate XSD" button. 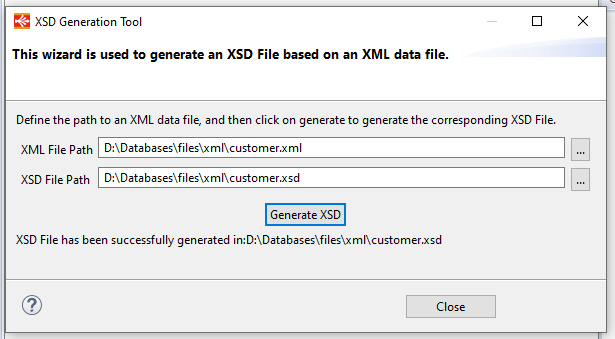 On selective reverse window, when asking to finish the reverse without selecting a node, a confirm message will be opened to inform the user that no node has been selected.

A new input information named "Media Type" has been added on HTTP REST reverse wizard. The Media Type field allows to define which type of data it is, for instance JSON, XML, FORM, … and which is used to know which parser to use. When starting the wizard, The Media Type field is automatically filled with the defined value in Media Type Metadata attributes, if the attributes have a value defined.

The Content-Type Header has been also updated to allow to define the http content type header to be sent with the request.

Reverse REST wizard has been improved to ease the definition of FORM values.

FORM values used to be manually defined in the input body, which could not be very user friendly.

They will now be defined directly in the parameters table, and the wizard will automatically generate them with the proper syntax in the input body. 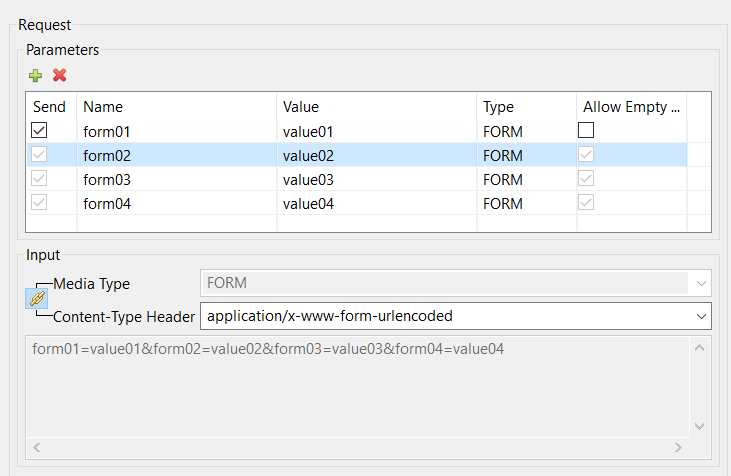 The HTTP REST wizard has been updated to support NTLM authentication type and to support proxy security.

When NTLM security and Proxy security are defined then it will be successively proposed in Authentication type and in Security Proxy Reference on Reverse REST wizard launched launched an operation: 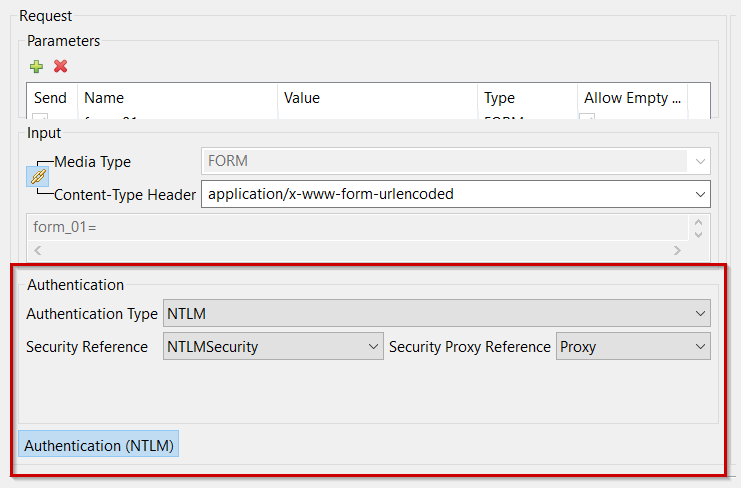 A new node has been added on WSDL metadata to define NTLM properties. 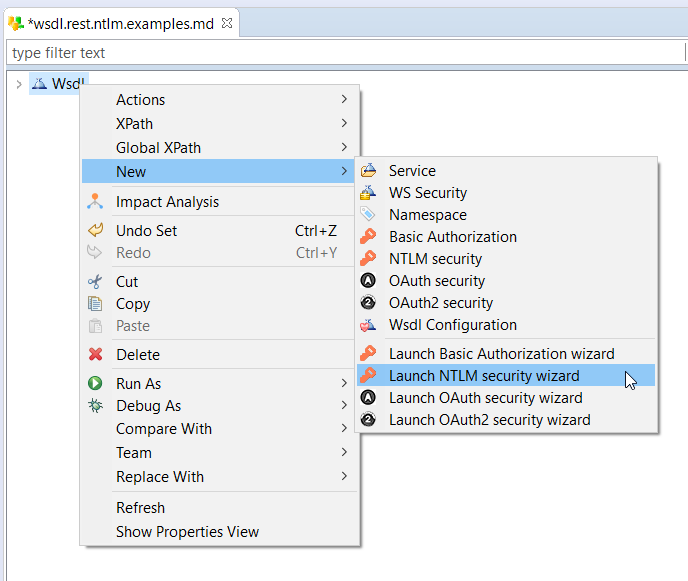 Asking to create a new NTLM security allows to define the Name, UserName, Password and Domain of the security. 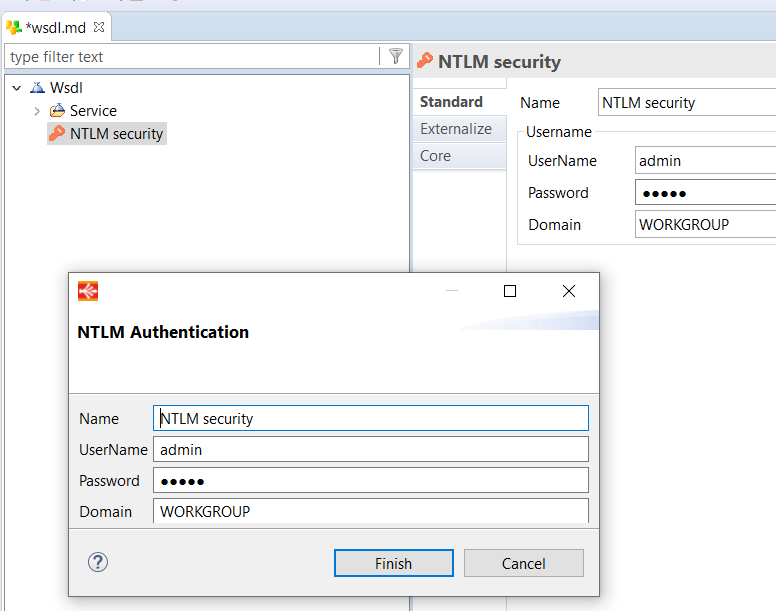 The reference content wizard which allow to create a Metadata based on a reference Metadata, such as Twitter Component, proposes the nodes to copy and new buttons "Select all" and "Deselect all" have been added in this wizard to allow user to mass select/deselect nodes. 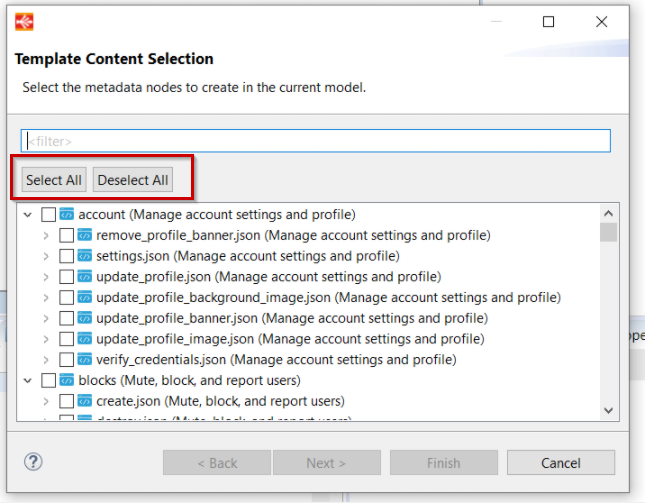 You can find the EGit installation at this location.

Subclipse Installation URL has been moved from https://dl.bintray.com/subclipse/archive/release/1.8.x/ to https://subclipse.github.io/updates/subclipse/1.8.x/. 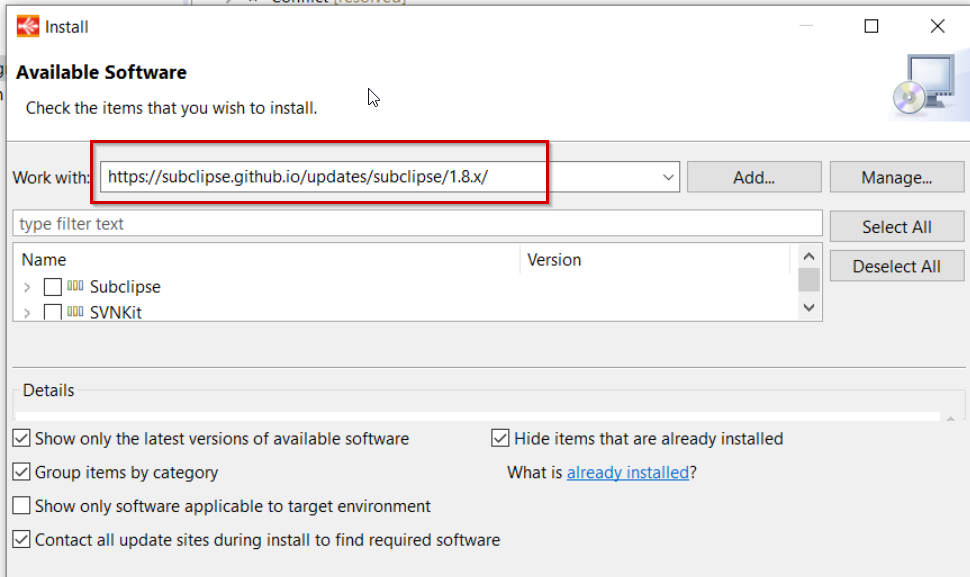 In Licenses Service, we have the possibility to customize the certificate used by the license service,the designer has been updated to be able to define define certificate.

Stambia.ini file has been updated to support four new properties to define an additional keystore containing the certificate for the license service.

To define the custom keystore that the designer will use additionally, we should configure stambia.ini file by adding the following lines:

After stambia.ini configuration set, we can use the matching server or key license in designer.

For the exchanges the designer takes into account a combination of the following certificates:

With this, the designer takes into account automatically the truststore of the JVM, which allows to accept most of the signed certificates automatically.

After stambia.ini configuration set, we can use the matching server or key license in designer.