In this article, you will find the steps to migrate from Stambia DI Designer S17 version to S18 / S19

The whole procedure is described with additional notes and information about the major modifications you should have in mind.

The migration procedure will guide you to migrate to the new version and also explains the first step to follow after the migration is done.

There are dedicated articles for migration and upgrade procedure for the different major versions.

There are all summarized in the following article.

Do not hesitate to have a look at it.

This article is dedicated to the migration from Stambia DI Designer S17 to S18 / S19.

There are major differences between those which requires some additional information and migration explained in this article.

If you are simply doing a minor version upgrade, please refer to the corresponding article which will guide you to do it.

All migration / upgrade articles are summarized in the following article.

Upgrading the Designer? the Runtime? Analytics?

The Runtime is still with the version name "S17.x.x". This means that you can continue running your existing S17 Runtime for executing deliveries from S17 Designers as well as S18 / S19 Designers.

In the same way, Analytics does not need to be upgraded at all for receiving S18 / S19 Designer's packages, or to view their sessions.

So, feel free to make use of the new Designer, especially for your new developments!

Here are the steps to follow to migrate Stambia DI Designer to S20.

The first step is to prepare your old Designer and Workspace:

Next, back up all your work to avoid any loss in case of migration problem:

Once everything is closed, stopped, and has been backed up, you are ready to install the new version:

No, when you will launch S18 / S19 on your existing workspace, Stambia Designer will start the upgrade Process.

Stambia strongly recommends to backup your S17 workspace before proceeding.

And then you can open your workspace with Stambia DI Designer S18 / S19. Carry on reading to know more about the main changes.

What is the "Internal Resource Management" prompt about?

When opening a S17 workspace for the first time with Stambia DI Designer S18 / S19, you will be prompted with this question:

Internal Resources exist since the very beginning of Stambia. These resources define how the Designer can reverse a technology, transform Xpath expressions into SQL queries, convert datatypes, etc.

Before S18, they were stored in the ".tech" project which is hidden by default.

Stambia Designer S18 introduces a new storage for Internal Resources, which will give you more control on them.

So for now, you have to make a decision about what to do with your legacy ".tech" project:

Why are there warning icons on my Mappings?

The upgrade Process leaves your existing Mapping files unchanged: only the internal build files are regenerated. This warning icon informs you about the Mappings that are still under S17's architecture. However, if you execute them (directly or by executing any parent Process) the generation will remain unchanged and continue to work exactly as in S17.

As soon as you will have edited and saved them, Stambia DI Designer will silently move them to the new architecture and this warning icon will disappear.

Note: the presence of non-migrated Mappings in a S18 / S19 workspace, may produce errors when trying to Move Metadata nodes to Sub-Metadata files. Thus, we recommend to migrate all the Mappings that use this Metadata before moving it.

Stambia generates internal files in the indy.build folder. In S17, this folder existed as a sibling of each Mapping in a Project. In S18 there is only a single indy.build folder under the root of each project. 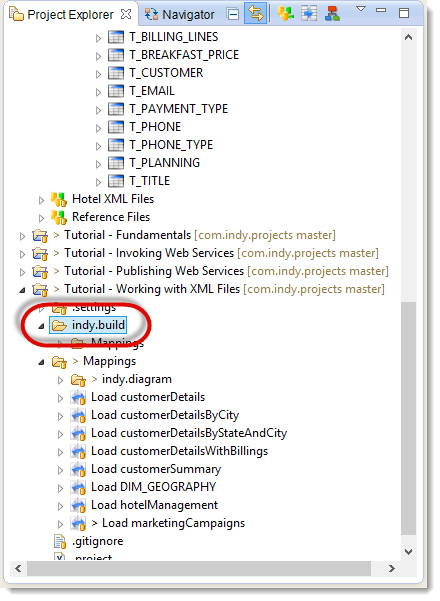 Source in more than one Load is detected

In S17, when a source table was used in more than one Load Template, the Mapping would silently compile - and sometimes produce undefined behavior at execution.

Stambia S18 / S19 prevent any misbehavior before compilation. The developer is now informed with a "Problem" icon on the join: 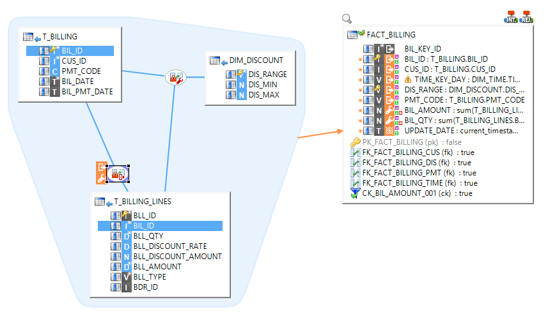 Cross Joins have to be designed

This paragraph only concerns Mappings with RDBMS targets.

In version S17, when dragging source tables without designing a Join between them, a Cross Join was generated.

In version S18 / S19, those Mappings will display with a "Problem" icon (red triangle) on the target:

This is normal: the new Mapping model requires that Joins are designed so that the table is identified as part of this target's source.

These Mappings should be modified in order to design the Join explicitly:

Note: Stambia discourages the use of relative path to reference parameters in Mappings and recommends using an absolute path such as ${~/MY_PARAM}$.

If you have a Process which references a template variable, for example:

... then you will have to modify it in order to take into account a new level introduced during code generation.

Note: in this example, you may prefer to get the statistic using __ctx__.sumVariable("SQL_STAT_INSERT", "~/mapping")

After migrating projects created in version S17 you might encounter a problem that will prevent you from collapsing the list of fields on a datastore in a Mapping :

To solve this issue you should right click on the Mapping name in the "Project Explorer" and go to Advanced>Reinit diagram.

If you do not use notes on your Mappings you can simply remove all .map_diagram files from your migrated workspace. This way upon first opening of a Mapping in S18/S19 its diagram file will be recreated from scratch.

Stambia DI Designer S18 / S19 brings a lot of changes when it comes to building a Process based on your Mappings.

The structure of this Process is so different that when you execute a delivery that contains a Mapping built in S17 the new designer won't be able to correctly associate the steps of the old Process to the new ones generated in a Process in your workspace.

As a result, you won't be able to see the details of the actions executed as part of the delivery generated in S17: 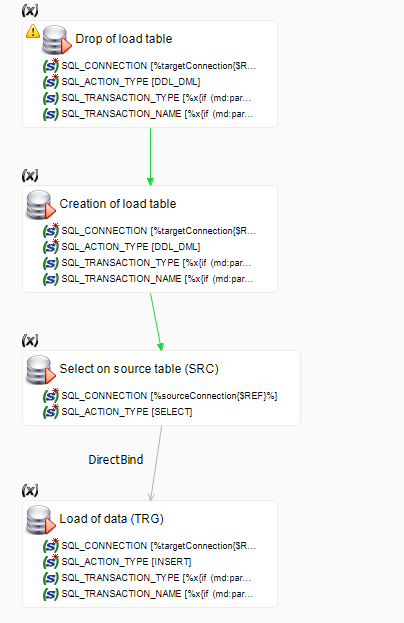 You can still consult the details of those sessions in Stambia Analytics.

Alternatively you can rebuild your deliveries in S18 / S19.

Once you have finished following the migration guide, you can start using your fresh new Stambia DI Designer!

Refer to the release notes to discover all your new features!

After having checked that everything is OK, you can remove the old Designer's directory from your disk

You can check your Designer version in the menu Help / About Stambia Designer. The version number has this form: S99.9.9_YYYYMMDD_HHmmss.

Once a workspace has been opened with a newer version of Stambia Designer, do not try to re-open it with a previous version.

If you encounter issues while performing the migration, double check you have followed properly all the steps, and make sure you had a look on the getting started articles related to this new version.