Getting started with HBase

HBase, the Hadoop non-relational, distributed database, is fully supported in Stambia as explained in the presentation article.

You'll find below everything needed to begin using HBase in Stambia, from the Metadata creation to the first Mappings.

You must install the Hadoop connector to be able to work with HBase.

Please refer to the following article that will guide you to accomplish this.

The first step, when you want to work with HBase in Stambia DI, consists of creating and configuring the HBase Metadata.

Here is a summary of the main steps to follow:

And here is an example of a common Metadata Configuration

Create first the HBase Metadata, as usual, by selecting the technology in the Metadata Creation Wizard: 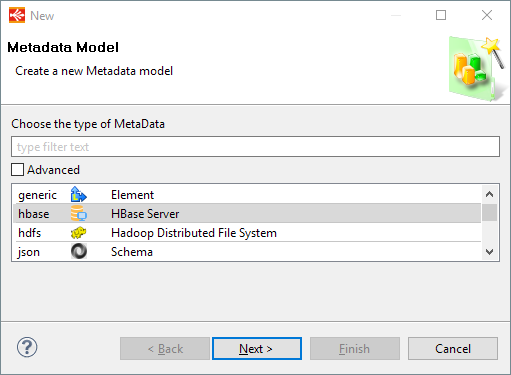 Configuration of the server properties

Your freshly created HBase Metadata being ready, you can now start configuring the server properties, which will define how to connect to HBase.

The following properties are available:

Configuration of the Kerberos Security

When working with Kerberos secured Hadoop clusters, connections will be protected, and you'll therefore need to specify in Stambia the credentials and necessary information to perform the Kerberos connection.

A Kerberos Metadata is available to specify everything required.

Reverse of the namespaces and tables

Your Metadata is now ready to begin reversing the existing namespaces and tables.

When performing the reverse, Stambia connects to HBase, retrieves the namespaces and tables, with their structures, and creates the associated Metadata.

Example on the server, to reverse everything: 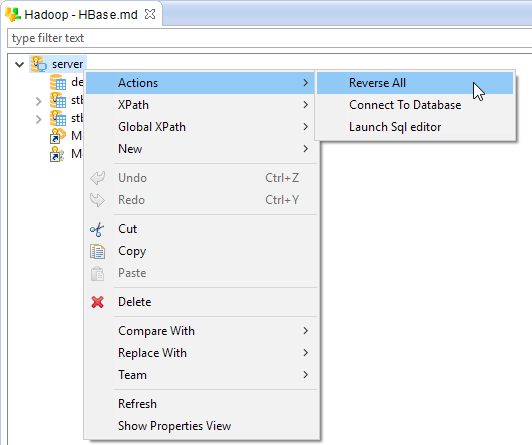 About the namespace node

The namespace node is the container for tables, and physically exists on the HBase server.

The following properties are available:

About the table node

The table node represents an HBase table, which contains families, containing themselves columns. 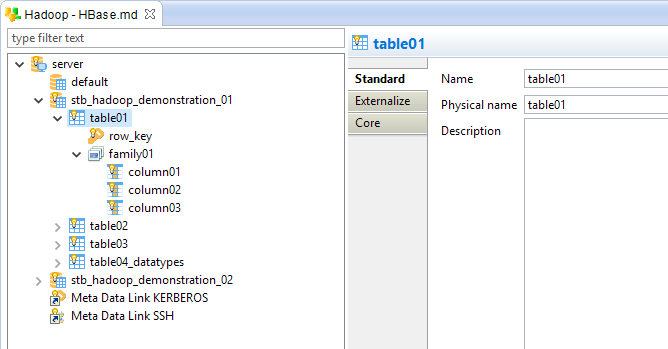 The following properties are available on the table:

The following properties are available on a family:

The following properties are available on the columns:

In HBase, every row is uniquely identified by a 'Row Key', which is a special field associated to each row inserted.

We decided in Stambia to represent it as a specific column, to offer the possibility to fill its value at write and read.

This special column is created automatically at reverse by Stambia, and is represented with a little key icon 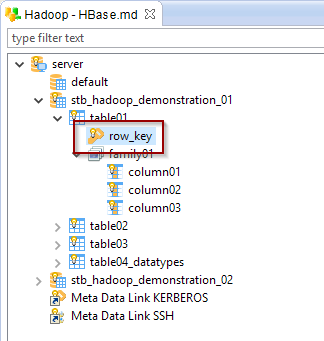 If needed, you can also create it manually, this is simply a column which must be named 'row_key', and in which the Advanced/Is Row Key property is checked.

Note that only one column should be set as Row Key, and we advise to let Stambia create it automatically at reverse to avoid any issue.

In HBase the columns contained in a row are not pre-defined.

Meaning that there can be different number of columns from row to row, which can be completely different.

When reversing the columns, Stambia scans the number of rows specified on the server node to find all the columns available in these.

As a consequence, the reversed Metadata might not contain all the existing columns, depending if they were present in the scanned rows or not.

If needed, you can easily add new columns manually in the Metadata with a right click > New Column menu on a family.

The columns are dynamically managed by HBase when inserting data.

HBase stores everything as bytes in its storage system and it doesn't have a notion of datatypes for the columns.

We decided in Stambia to offer the possibility to specify datatypes on the columns to ease data manipulation between different technologies.

This helps Stambia to have an idea of what is contained in a column, to treat it correctly when reading data from HBase.

This helps also to define the correct SQL types and size in the temporary objects created and manipulated when loading data from HBase into other database systems such as Teradata, Oracle, Microsoft SQL Server...

This tool is used to load data from HDFS into HBase and is optimized for having good performances.

The Stambia templates offer the possibility to use this method to load data into HBase.

For more information, please refer to the following article which explains how to configure the Metadata and Mappings to use it.

Your Metadata being ready and your tables reversed, you can now start creating your first Mappings.

For the basics HBase is not different than any other database you could usually use in Stambia.

Drag and drop your source and target and map the columns as usual.

Example of Mapping loading data from HSQL to HBase:

Example of Mapping loading data from HBase to HSQL, with a filter on HBase:

Filters must use the HBase filter syntax, such as SingleColumnValueFilter ('family01', 'column02', = , 'binary:gibbs').

Refer to the HBase documentation and examples in the Demonstration Project for further information.

Example of a join between two HBase tables to load a target HSQL table:

The join order defined with the Left Part / Right Part of the properties is important.

Notice the little triangle on the joined table link (table02) in the Mapping.

-> In this example we are retrieving all the table01 rows from which the Row Key exists in the table02.

You have at your disposal in the HBase templates a Process Tool that offers the possibility to perform management operations on HBase, such as creating namespaces or tables, enabling or disabling tables, ...

Using it is quite simple:

The Hadoop demonstration project that you can find on the download page contains HBase examples.

Do not hesitate to have a look at this project to find samples and examples on how to use HBase.