This article describes the principal changes of the Elasticsearch Connector.

The connector download section can be found at this page.

This new version supports using the routing value to define joins between documents, as stated in Elasticsearch documentation.

After having reversed a document with a join in your Elasticsearch Metadata, simply add a new value named "routing" at the document's root, and map it in your Mappings.

Refer to this article for further information.

A new parameter is available in Metadata to select the Elasticsearch server version, which will be used to know which API to use.

Defining this parameter is now mandatory.

This version allows to externalize the SSL Security parameters which can be defined on the Elasticsearch Metadata.

For instance, externalizing the following parameters: 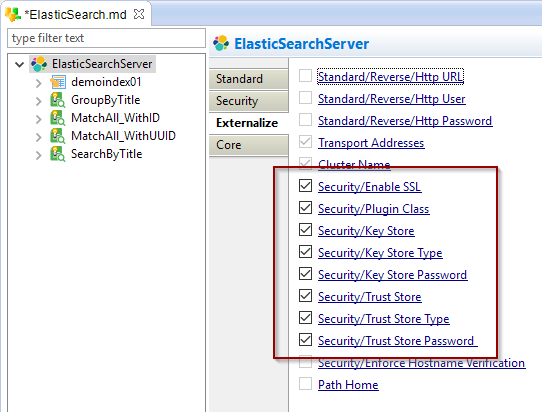 On previous versions, externalizing those parameters did not work because it was not handled correctly in the Elasticsearch technology and connector.

This has been fixed and the SSL Security parameters can now be correctly externalized.

Note that you'll have to re-generate the Packages of your flows after having installed the new connector version to benefit of the correction.