This article describes the principal changes of Elasticsearch Component.

The download section can be found at this page.

Several improvements have been made to support EMF Compare.

This protocol has been deprecated by Elasticsearch, which currently recommends using the HTTP/REST protocol.

A new attribute has been added to allow choosing which protocol to use.

Below is some information about the two protocols.

It is currently deprecated by Elasticsearch, and later versions will not support it.

It is the currently recommended protocol client by Elasticsearch.

It is supported from Elasticsearch 5.6 and higher versions.

Choosing the protocol in Metadata

In Elasticsearch Metadata, you can select the new protocol on the main server node. 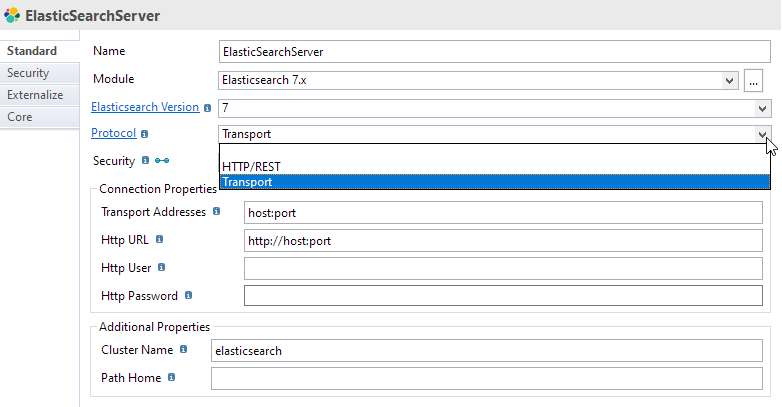 Note that "Transport addresses" fields attribute is displayed only when transport protocol is selected.

The HTTP Protocol cannot be used with Elasticsearch Version 2.

Elasticsearch 2.x support is now kept as legacy and compatibility purposes, as this version is not supported anymore by Elasticsearch.

Only maintenance and critical fixes will be performed on Elasticsearch 2.x.

Multiple improvements have been performed to homogenize the usage of Change Data Capture (CDC) in the various Components.

Parameters have been homogenized, so that all Templates should now have the same CDC Parameters, with the same support of features.

Multiple fixes have also been performed to correct CDC issues. Refer to the changelog for the exact list of changes.

Xpack security is now supported by the Component.

You can define a new Xpack security node under your Elasticsearch Metadata.

Define the required properties on it, which may differ depending on your Xpack configuration.

And then use this Xpack node as security by selecting it on security attribute: 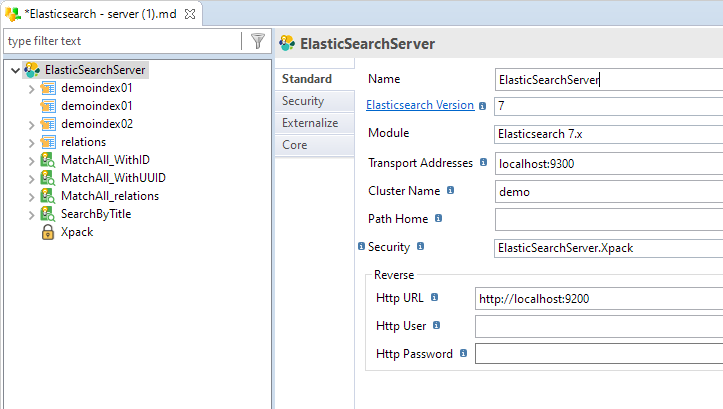 Ability to limit the number of hits returned when performing searches

A new parameter is available on Search Template to limit the number of hits to return.

It is named "ESearch Hit Limit" and defaults to "-1" to retrieve all hits.

Most notably, it fixes issues with cluster name and Search Guard properties which were ignored.

The component example project can now be imported directly in the "New" menu of the Project Explorer.