A Runtime Metadata is available in the Designer to define your Runtimes.

It can be used on Execute Delivery Actions, for instance, and to populate the Runtime's list of the Designer.

You may have noticed the 'Object Selection' technology that is listed in the Metadata Creation Wizard.

This specific Metadata allows to aggregate in the same place a list of existing Metadata, to create a 'view' of Metadata.

This can be useful to create a referential of Metadata regrouping all the Metadata used in a Project, for instance.

Metadata properties can be set directly in the Metadata editor, and the value will shared by all the mappings/processes using this Metadata.

It is also possible to make them dynamic, with the use of Process parameters or Variables.

There are already some articles which can be consulted on the subject:

How to use a variable as a table physical name

How to generate files with dynamic name

These articles should give a good idea on how to use Metadata Variables to make Metadata properties dynamic.

Like with the Metadata Variables, a Process Parameter can be used for this.

First, the metadata has to be configured: 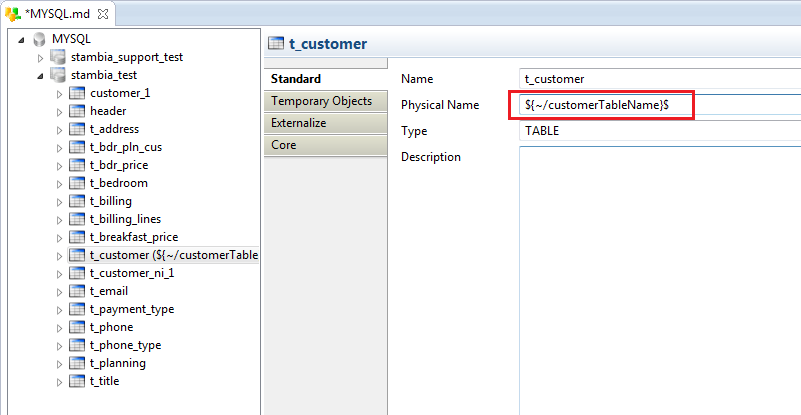 Note: the path to the Process Parameter starts with a ~. This is important as the Metadata may be used in any Sub-Process or Action within the main Process. As a consequence, it is important that the parameter value can be retrieved from each of them.

Then, we can use it as a parameter in the main Process:

The physicalName will now be dynamically set with the parameter value when executing the process.

To go further, this article can also be consulted to learn how to use process parameters in a Mapping:

How to use a process parameter in a mapping

A metadata query is a SQL query (a select query most of the time), which can be reversed and used like a datastore.

This feature was introduced with Stambia S18.0.3 and it allows to have custom datastores representing SQL queries.

The first step is to create a query folder, in which our queries will be stored :

Then, give a name to the folder. My Queries for example.

Now, you can create a query with :

Configure the query with a name and a sql query, and finally reverse it with :

A query defined like that will be always selecting from the table HOTEL_MANAGEMENT.T_CUSTOMER (since the name of the schema is hardcoded).

To make it dependent on the configuration used on the metadata you can use the expression of this type :

This allows to get the schema name from HOTEL_MANAGEMENT metadata element, so in case you apply a configuration for this element and change its 'Schema Name' property this change will be reflected in the executed query.

As metadata queries are most of the time select queries, there is no sense to use it as target

Metadata files have a bunch of information about the connection properties, file's path, and more depending on the type of Metadata.

To access those information and use it dynamically, a language called XPath can be used, which is standard language allowing to browse XML file data (which is how Metadata files are stored in background.)

Depending on the technology on which you are working, we added a bunch of dedicated XPath custom functions which allows to retrieve various information.